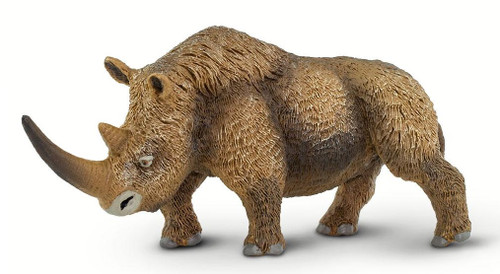 Coelodonta lived during the Pleistocene Era, from around 3 ½ million years ago to just over ten thousand years ago. While it was long believed that climate change at the end of the last Ice Age led to their extinction, interactions with early humans likely played a larger role, as these giant beasts were hunted heavily by our prehistoric ancestors. In addition to skeletal remains, the appearance of Woolly Rhinos can also be determined from mummified specimens discovered in Siberia and other frozen northern areas. They were also drawn in cave paintings by early humans, giving scientists a better idea of how these animals looked in life. The closest living relative of the Woolly Rhinoceros is the endangered Sumatran Rhino, which also has a coat of shaggy fur, though it is not as thick as that of Coelodonta.