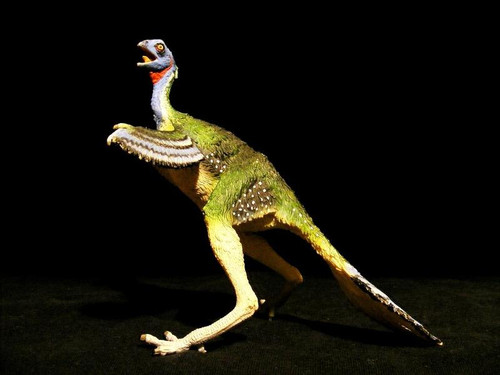 An enchanting figure based on the exotic maniraptoran.
In life, the Cretaceous theropod Caudipteryx resembled an exotic bird.  The body was covered in short feathers, with longer feathers extending from the the limbs and tail.  However, it is not believed to have been capable of flight.  The powerful legs suggest that it was an oustanding runner, likely able to evade larger predators in dense forests.  Fossilized skeletons have been preserved in great detail, even revealing gastroliths in the animal's stomach.  Since the Caudipteryx was only about a meter in length, it has not been reconstructed to scale with most other animals in the Carnegie Collection.  Instead, it has been given outstanding attention to detail in a striking replica that measures just over six inches in length.