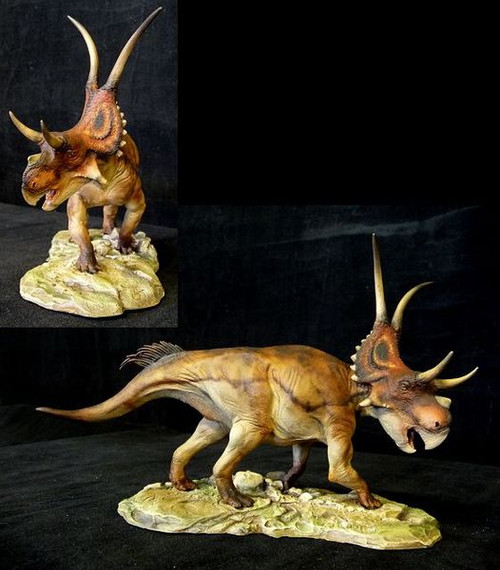 A wicked-looking herbivore, sculpted by Sean Cooper and finished by Martin Garratt.
Where irregular terrain meets parched riverbed, the irritable harem of Diabloceratops congregates. They relish the cool shade of this cliff base in the hottest hours of the day, but these anxious females must always be wary of their patriarch. Disease has ravaged his health and left him dehydrated and unsteady. Masses of cracked skin sag from his ancient body, infected pustules oozing at his neck. The herd has not prospered under this harsh leadership, with no viable offspring in the entire season. He is too weak to mount the females, many of whom bear bite scars that were inflicted by him for no apparent reason. The decrepit male is so disoriented, he is among the last of the group to notice the intruder approaching from the east. Sunlight illuminates a heroic silhouette, framing in gold the parietal display of this fresh, young bull. His long horns are beautifully symmetrical, his physique more chiseled than any they have seen in their entire lives. The females groan and grunt as the stranger strides forward, then grow quiet until the only sound is their loud sniffing, inhaling the virile scent of this newcomer as he passes among them. He enters the harem as though it is already his.

The "devil-horned face" dinosaur Diabloceratops was first described in 2010. Sporting a satanic array of horns on its skull, this dinosaur achieved instant celebrity among paleontology lovers. The first toy representations of this new dinosaur were released in 2013, though none compare to this magnificent reconstruction crafted by renowned paleoartist Sean Cooper in the same year. This model meticulously captures the morphology of this strutting ceratopsian, eager to take on all comers as he assumes dominion of the herd.

Another magnificent dinosaur from the Dan's Dinosaurs line. One of the most exciting Ceratopsian finds to my mind, this is one wicked looking dinosaur. With a custom paintjob from Martin Garratt to underline the diabolical name, this is a thing of beauty. For this review, I wanted to spend some time sharing what I learnt about resin kits, and why they are priced so much more than a mass produced figure. To do this I compare aspects with my Wild Safari Diabloceratops, another replica that is actually of very good quality. Images used with permission from Román García Mora. Check out his work at http://romangm.com/