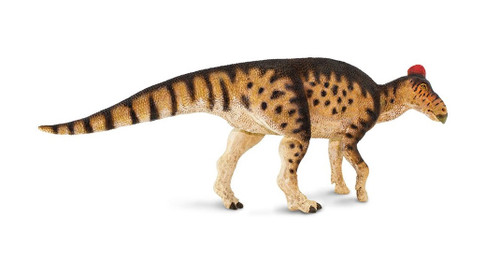 Edmontosaurus has been known by many names over the years, including Anatosaurus (“Duck Lizard”) and Anatotitan (“Large Duck”). It has also been associated with other dinosaurs that we now know to be separate animals, including Trachodon and Hadrosaurus. Three specimens of Edmontosaurus show remarkable preservation. These include the “Trachodon Mummy” discovered in 1908 that provided a great deal if information on the skin of the animal and what its scales looked like. Another Edmontosaurus, nicknamed “Dakota” was discovered in 2006, and featured skin impressions as well as preserved muscles and tendons. The third specimen shows that at least one species Edmontosaurus possessed a comb-like fleshy crest, unlike the bony crests of hadrosaurs like Parasaurolophus.