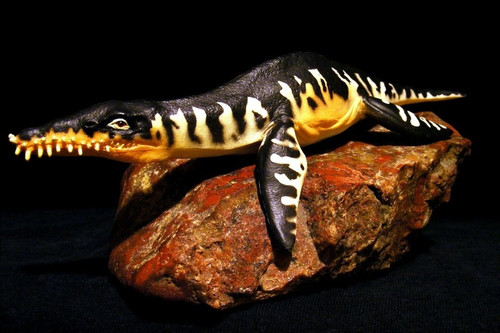 This apex predator was a master shark hunter.
Procon CollectA presents this figure of the sea dwelling super predator, Liopleurodon. This animal was an apex predator within its ecosystem, likely feared by most creatures and feeding on prehistoric sharks. Much of the Liopleurodon's physiology remains hotly contested within the paleontological field, particularly after receiving a starring role in the BBC's documentary Walking With Dinosaurs. Even so, this carnivorous marine reptile is believed to have grown to lengths of at least thirty feet. The Liopleurodon is not commonly depicted as a figure, so this is great opportunity for collectors to acquire one. Sturdy and handsomely painted in contrasting hues, this seven inch Liopleurodon figure is a must-have for marine reptile enthusiasts. Rock base not included. [ toy toys model models figure replica figures image photo picture ]