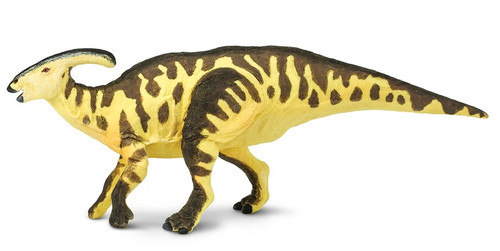 A spectacular, complete skeleton of this crested dinosaur was first discovered in 1920, in Alberta, Canada. The stunning crest of Parasaurolphus has generated much speculation over the years. When Parasaurolophus was first discovered, it was presumed to be amphibious, and so some palaeontologists suggested it could use its hollow crest as a snorkel. However, the tip of the crest is completely closed, so this theory has been generally dismissed. Alternatively, it is possible that the hollow crest was used as a resonating chamber to generate loud bellowing sounds. Other researchers have suggested that the crest may have been colorful, to be used in mating displays or to help individuals recognize others of the same species. Parasaurolphus is now regarded as fully terrestrial. It lived its entire life on land and used its sturdy limbs and hoof-like claws to support its weight. Its flattened ‘bill’ helped it to strip leaves from pine trees, and it used its hundreds of tightly packed teeth to grind the tough plant material. This fascinating dinosaur lived in Late Cretaceous times, around 75 million years ago, alongside a variety of other dinosaurs.