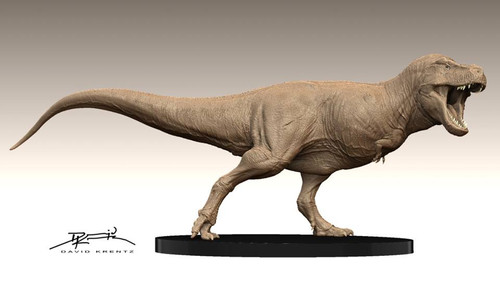 Paleoartist David Krentz used advanced ZBrush digital sculpting and 3D printing to bring out staggering detail in this massive sculpt, which was released as a resin kit in 2019.

"Regina Mundi is my 3rd interpretation of Sue, the famous T.rex from the Field Museum of Natural History in Chicago. Our understanding of dinosaurs changes all the time, as do their appearance. In 1999 my first version of Sue (Rex Mundi) was much thinner - these days it would be called "shrink wrapped". In 2008 my second version was the Sideshow Collectibles T.rex. She was more fleshed out and reflected some of the wounds and pathologies that have been described on the skeleton. This new version, Regina Mundi, is my most comprehensive version to date. After working with paleontologists for a period of 5 months, this is the shape she now takes. She is now a big beefy brute! New evidence suggests thats T.rex was perhaps covered in tiny little scales and its face may have been protected by a keratinous sheath and large scales on its snout. The prospect of some kind of hair or feather like integument can still not be ruled out, so I included what I like to call "elephant hairs" over parts of her body. Recently it has become common to depict dinosaurs with lips which was something I could not resist exploring. I tried to incorporate every wound and pathology that Sue had, from gout, broken bones, infections, bites and pulled muscles... It is clear this dinosaur led a rough life . She was a real character. I can't resist a good character. I won't lie, this sculpt was a hard one for me to do. I was trying to break old habits and reinvent my style. I wanted a pose that said "don't mess with mamma-bear" but still maintain a subtle more animalistic gesture. I tried for grace and girth at the same time. I hope I got that."

This model may require several weeks to cast. Like all resin kits, it ships disassembled and unpainted, and may be sent to a professional buildup artist upon request.